On the eve of the Bellbird Pictures documenatry Dave Hogan talks to Jim Mora on National Radio about his several encounters with the Rolling Stones and his experiences as a member of the Unknown Blues.  This is a great interview which adds to the rich archive of material about this iconic Invercargill band.

The long awaited documentary about the late-1960's Invercargill band the Unknown Blues, and its unusual association with biker gang the Antarctic Angels, is set for release in late September.  Filmed and produced by Simon Upston of Bellbird Pictures in 2011, the 52 minute documentary will provide a rare insight into what it may have been like to be a teen rebel in Invercargill two-and-a bit decades after the end of World War II. 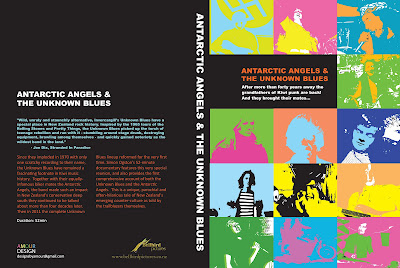 "They imploded in 1970 with only one scratchy recording to their name, the Unknown Blues have remained  a fascinating footnote in Kiwi music history. Together with their equally-infamous biker mates the "Antarctic Angels", the band made such an impact in New Zealand's conservative deep south they continue to be talked about more than four decades later after they stopped playing.
Then in 2011 the complete Unknown Blues lineup reformed for the very first time in more that forty years. Simon Upton's 52-minute documentary features this very special reunion and also provides the very first comprehensive account of both the Unknown blues and the Antarctic Angels.

This documentary is a unique, parochial and often hilarious tale of New Zealand's emerging counter-culture as told by the trailblazers themselves. It features interviews with all of the band members and former-Antarctic Angels, as well as around 100 fantastic photos from the era.
This self-funded film is about to premiere in Christchurch, Dunedin and Invercargill. It will screen as the first-half of a short series of double-features, together with Simon Ogston's other rock documentaries, "Rumble & Bang" (about Chch legends "Chants R&B") and "Gone With The Weird" (about ChCh underground band "Squirm"). Both of these films were part of the 2011 NZ International Film Festival

Simon, as well as members of the band and biker gang, are keen to publicise these screenings and the documentary release on DVD. Simon can provide interviews, information and photos on request. Simon is happy to put people in touch with the band and/or gang members. Please do not hesitate to contact him if you are interested in covering this very special event."